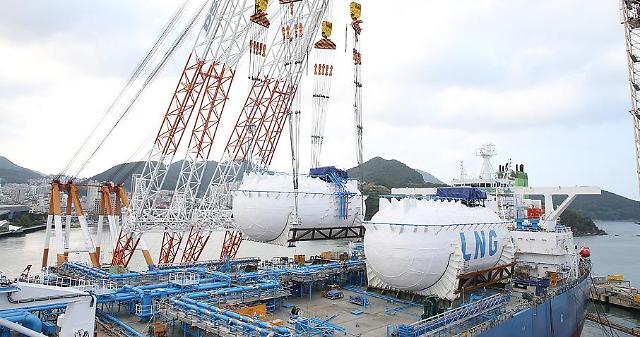 SEOUL — In a ceremony that heralded the accomplishment of complete technology independence, a liquefied natural gas fuel tank made of high manganese steel was installed on a giant oil carrier at the shipyard of Daewoo Shipbuilding & Marine Engineering, a major shipbuilder in South Korea. High manganese steel is an alternative material for cryogenic services.

The ceremony on June 16 was the result of a joint study by Daewoo Shipbuilding & Marine Engineering (DSME) and the research center of South Korea’s steel group POSCO to apply high manganese steel to tank manufacturing for more than 10 years.

POSCO’s high manganese steel has been approved by the International Maritime Organisation (IMO), a U.N. maritime safety agency. It is cost-effective and showed superiority over existing cryogenic materials in terms of elongation and ultimate tensile strength.

“Our company, which boasts the world’s best competitiveness as a master of LNG carriers, has set another milestone,” DSME CEO Park Doo-sun said in a statement. “It is a valuable result obtained from a joint project in the industry, and it is a technology that can be used at any time, so we will help strengthen the competitiveness of South Korea’s entire shipbuilding industry.”

High manganese steel has attracted attention as the next-generation material for LNG fuel tanks. South Korean shipyards have developed independent technologies ranging from processing and welding to mass-production, verification and installation. If price competitiveness is secured through mass production, DSME said the independent production of LNG storage tanks with high manganese steel would be possible.

LNG storage tanks are designed to prevent vaporization by blocking heat transfer and stop the hull from being damaged by exposure to cryogenic temperatures. Until now, cargo tanks and fuel tanks that withstand cryogenic LNG have been made of expensive nickel alloy steel, aluminum, and stainless steel. High manganese steel is cheaper and has higher strength and wear resistance as well as a better performance at extremely low temperatures.

The state-run Korea Institute of Machinery and Materials (KIMM) has teamed up with POSCO and other private companies to develop a liquid hydrogen storage tank using high manganese steel, which is easier to weld and has lower manufacturing costs than stainless steel. The liquefaction of hydrogen requires cooling to a temperature of minus 253 degrees Celsius and subsequent storage in cryogenic containers.