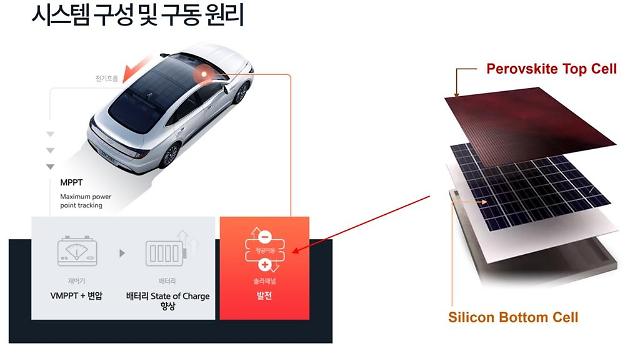 SEOUL — South Korea’s Hyundai auto group teamed up with a university research team to develop new perovskite solar cells that can efficiently charge vehicles when they are under the sun. The new technology will be applied to vehicle roofs containing solar panels, which are a relatively new phenomenon that promises to use renewable energy to add some charge to car batteries.

Hyundai Motor has released solar roofs with silicon solar panels, but their application has been slow without improvements in weight and efficiency. Silicon solar cells are safe and inexpensive, but they are heavy and have technical limitations in improving efficiency.

In a ceremony on June 10, the Ulsan National Institute of Science and Technology (UNIST) opened a joint laboratory with Hyundai to develop high-efficiency, large-area perovskite-silicon tandem cells and apply them to solar roofs. The joint laboratory will operate for three years until May 2025.

“Mobility solar cells should be light and efficient per unit area,” Seok Sang-il, a UNIST professor of energy and chemical engineering, said in a statement, vowing to produce perovskite-silicon tandem cells with “the world’s highest efficiency.” He did not specify on the purpose of new cells to be developed with Hyundai.

South Korean companies and researchers have tried to develop new technologies such as tandem cells that build perovskite on top of silicon solar cells. Tandem solar cells can be individual cells or connected in series, which are simpler to fabricate but the current is the same through each cell.

In October 2021, a research team led by Seok set a new record of 25.8 percent in the power conversion efficiency of perovskite solar cells by forming a coherent interlayer between electron-transporting and perovskite layers to reduce interfacial defects, laying the foundation for commercialization.