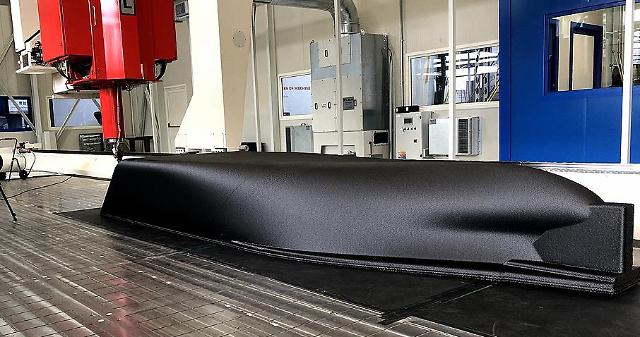 For the manufacturing of ships at shipyards, a model ship with a reduced shape is used for performance testing in a large tank, mostly made of wood.  Daewoo Shipbuilding & Marine Engineering (DSME) became an industry-first to produce the 10-meter-long model of a “Twin Skeg” ship using acrylonitrile butadiene styrene (ABS).

ABS is a common thermoplastic polymer that provides favorable mechanical properties such as impact resistance, toughness, and rigidity. The twin skeg concept is well proven with obvious advantages for the design of ships with full hull forms, restricted draft or highly loaded propellers.

With 3D printing technology, DSME said that the manufacturing period, which used to take three weeks, can be reduced by up to 40 percent. It can respond more quickly and flexibly to customers’ sudden demands for experiments, the shipbuilder said, adding that builders can greatly reduce cost and improve productivity by utilizing an unmanned automation system.

“This success will be an important opportunity to change the paradigm of the model ship production method,” DSME’s R&D institute head Choi Dong-kyu said in a statement on May 24. The prototype model ship will be verified at DSME’s research facility.

DSME said that some materials can be recovered from the tested model ship and used again. The company attributed its success to a combination of research efforts and experiences accumulated through advanced research facilities, saying it would consider introducing 3D printing equipment.